⇒Disclaimer: I purchased Laser Maze Jr. at a discounted price from the Timberdoodle Company in exchange for my honest review of this product. I was not required to write a positive review by Timberdoodle, and this review is an honest reflection of our family’s experience playing with Laser Maze Jr.

Please Note: Timberdoodle no longer carries Laser Maze Jr. so I have now included Amazon Links to my review. If you choose to purchase, I will earn a small commission at no extra cost to you! Thank you for supporting us. 🤗

I’m a big supporter of introducing STEM (Science, Technology, Engineering, and Mathematics) into a child’s curriculum as early as possible. Laser Maze Jr. is a great game to help peak children’s interest in STEM. STEM is everywhere around us and embracing it from a young age will help our kids stay on par with the world’s future growth. However, as I explained in my Hands-On Toys post, technology does have it’s downfalls if introduced too soon and/or if overused.

So how can we manage to balance introducing a healthy amount of STEM early on into our children’s lives, but still keep technology to a minimum? Timberdoodle does a great job in doing so from their very first Tiny Tot’s Curriculum, all the way up to 12th grade.

STEM has become a staple subject in our household. By introducing games that include a healthy balance of Hands-On skills and Technology, Timberdoodle does a wonderful job helping our children develop their Critical, Strategic, Problem-Solving Thinking skills from a very young age. Laser Maze Jr. is a great example of how young children can develop these skills and stay engaged without the need of any screen time.

What is Laser Maze Jr?

Laser Maze Jr. is a single player strategic game for ages 6 and up that uses a “Space Theme” to help capture young kids interest to play the game. Players need to resort on using their Critical and Strategic Thinking Skills, to make the laser beam hit each obstacle just right in order for it to reach and light up its designated “Space Rocket” target/s. Let’s look at a picture to give you a nice visual of the objective of this game. 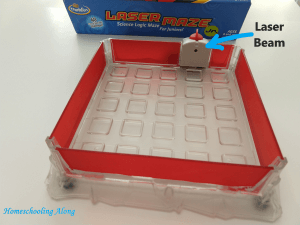 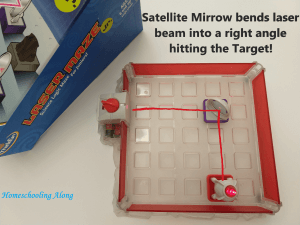 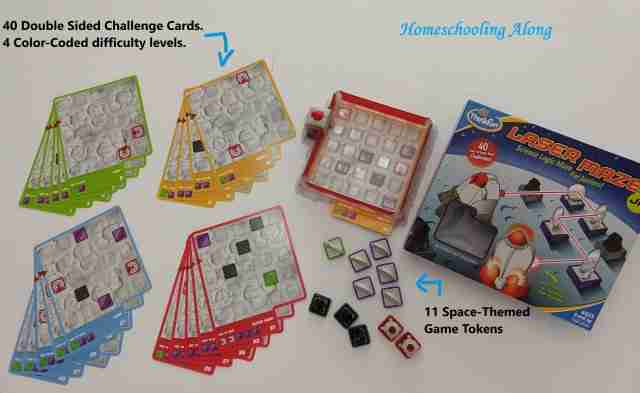 Unlike other games that begin being a challenge from the very first game card, Laser Maze Jr. does a very good job making the beginning stages of this game simple enough for younger kids. The Easy level of this game begins with very simple challenges that are meant to help a child understand how the laser beam bends when it hits each different object. The 40 Challenge Cards gradually build upon each other, which helps young players play and understand each step without any frustration.

Laser Maze Jr’s “Space Theme” makes this game a great pairing with any Astronomy curriculum. Since in our family we homeschool different ages and grades at the same time, Science is one of those subjects we combine. Our Science curriculum for part of our 3rd and 1st-grade year has been “Astronomy by Apologia”, so Laser Maze Jr’s “Space Theme” has really made this whole game very intriguing for our 6-year-old 1st-grader. The Satellite mirrors, Space Rocks, and Space Rocket game tokens are all terms my son is very familiar with and making this game very relatable to any Astronomy fan.🚀 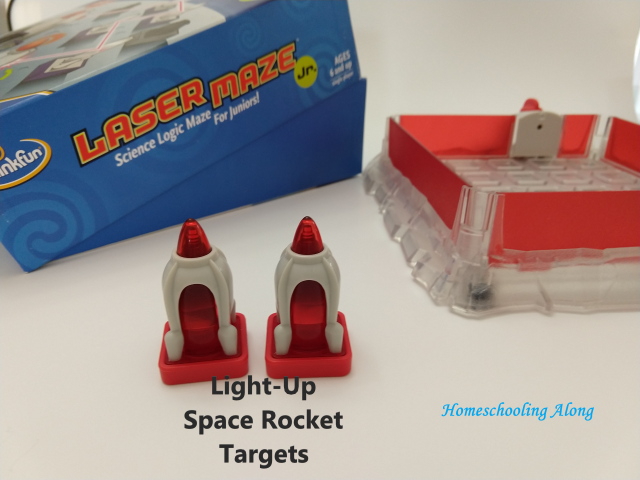 Laser Maze Jr‘s easy approach, clear instructions, and “Space Theme“, allows families to easily include STEM from an early age. Thinkin’ Fun (the Manufacturer of Laser Maze Jr.) labels this game for ages 6 and up. Although I believe this game could be easily played at a younger age, Laser Maze Jr‘s age placement is probably due to the risk of younger kids damaging their eyes if they were to look directly into the laser beam. Although this can’t easily happen since the laser beam is securely attached to the game grid, it is a good idea to use parental supervision for younger children playing this game.

How to Play Laser Maze Jr.

Step 1. Slide a challenge card inside the bottom of the transparent game grid. 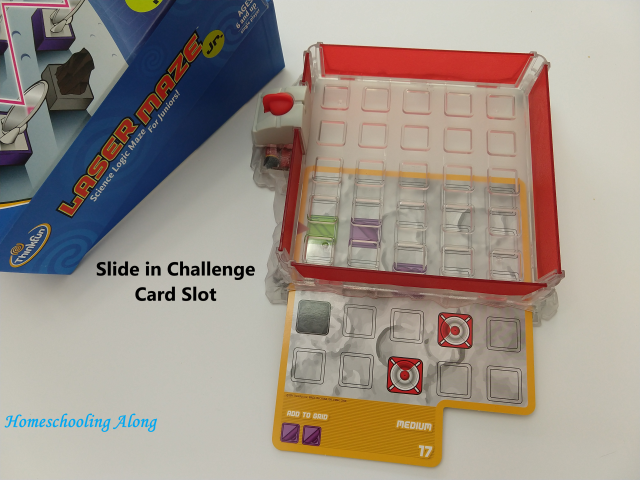 Step 2. Set up the game tokens as challenge card shows. — The placement of each game token is made very clear for even the younger players, requiring little to no adult assistance other than making sure kids don’t look directly into the laser beam. 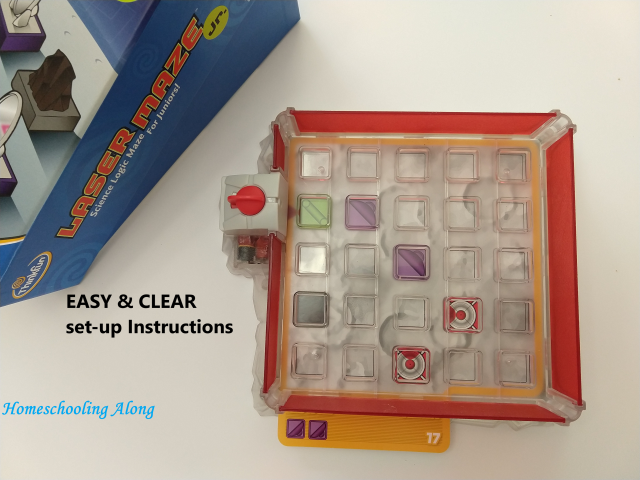 Step 3. Take the tokens shown in the “add to grid” card section and set aside. 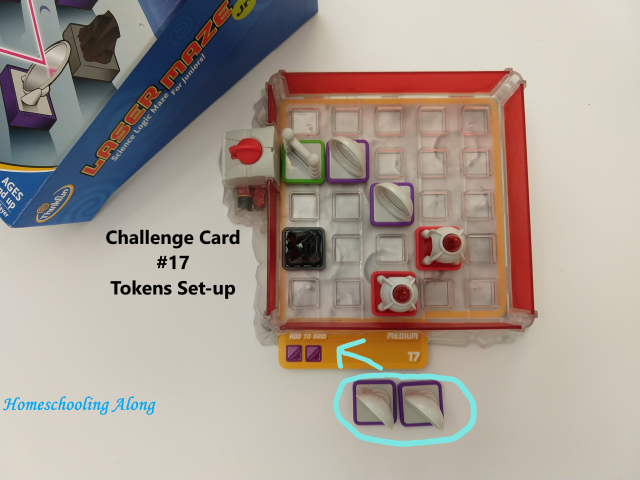 Step 4. Strategically place the “add on tokens” to the game grid to make the “Space Rockets” light up! 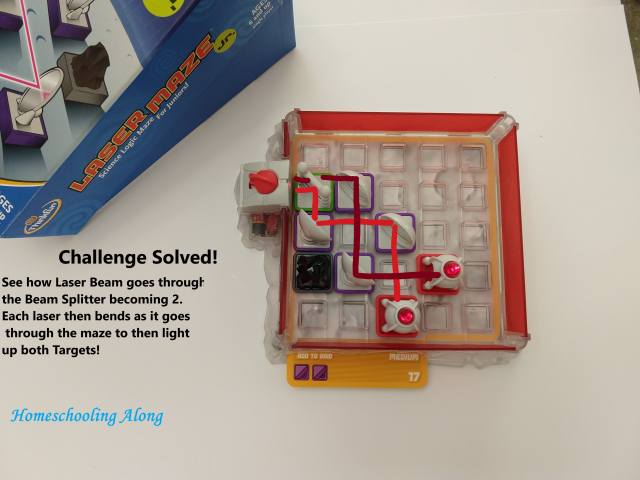 After setting up the game grid, players need to think how they can strategically place their given tokens to guide the red laser beam to hit the target/s (Space Rocket/s). Since the light of the laser beam travels in a straight line, the player needs to use “the satellite mirrors” and/or “beam splitter” tokens to bend it. My best advice is to just get kids set up and going, as they will quickly understand while playing how each token will bend or stop the laser beam on its tracks. Above is a visual of a solved challenge to show how each token works. 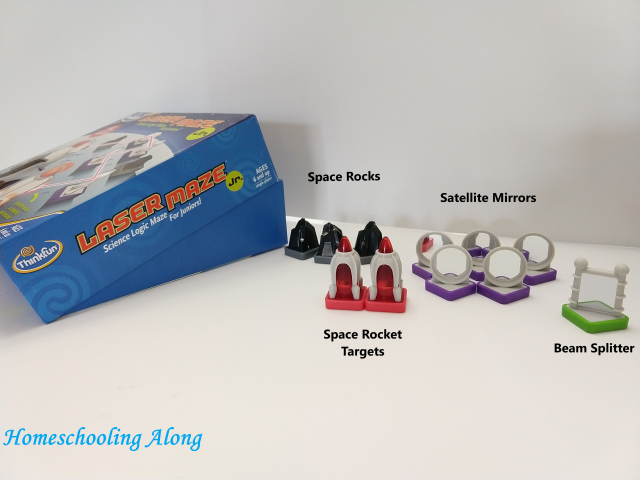 You’ll be surprised how intrigued kids become by watching how their course of actions can change the direction of the laser beam. I believe Mesmerized is the perfect word to describe my son’s reaction as he began playing. As I’ve mentioned, the 40 Game Cards do a great job on gradually increasing in difficulty. Younger players by the time they have reached the Medium level will have fully mastered how each game piece works making Laser Maze Jr. highly enjoyable for younger players.

As I was watching my son play Laser Maze Jr. it was very apparent how every token placement was very well thought, nothing he placed on his game grid was by chance. It was amazing to see his thinking wheels at work, and the excitement in his eyes every time he realized what he had planned worked! Playing Laser Maze Jr. is a great way to help younger kids develop their Critical Thinking Skills and here are some ways how…

I have to admit when I first opened the box and watched my son breeze through solving the first 14 game cards in 15 minutes, I got worried the Jr. version of Laser Maze was too easy for him. However, after the first sprint, my 6-yr-old (soon to be 7) then slowed down and can now only solve 1-2 cards per day (sometimes 1 card needs multiple days). I would definitely say the Easy level is extremely easy, but keep in mind this game is geared towards younger children who would probably get frustrated if they didn’t get any easy wins right off the bat!

Before giving Laser Maze Jr. a chance, I was of the opinion it wasn’t worth buying. Why? I have 3 young kids and like many homeschooling families making ends meet on one income. I usually prefer to buy things my kids can grow into, not fastly grow out of. However, after observing my 6 yr old son play Laser Maze Jr., I’m happy to say it was well worth the purchase.🙌 Having fewer and simpler game tokens than the older kids version, greatly helps the youngsters not get overwhelmed while trying to build their maze. Simply put, Fewer and Simpler game tokens = Learning-Fun without Frustration!

Since we had Laser Maze Jr. in the house, my almost 9-year-old son enjoyed trying a few challenge cards as well. Although this version of the game is too easy for him, it is a great way to help him learn the basics of the Laser Maze game while preparing him to enjoy the level up version.

” In summary, we have found Laser Mazer Jr. to be a great option for introducing STEM into a child’s early education”.

“See that you do not despise one of these little ones. For I tell you that in heaven their angels always see the face of my Father who is in heaven”.